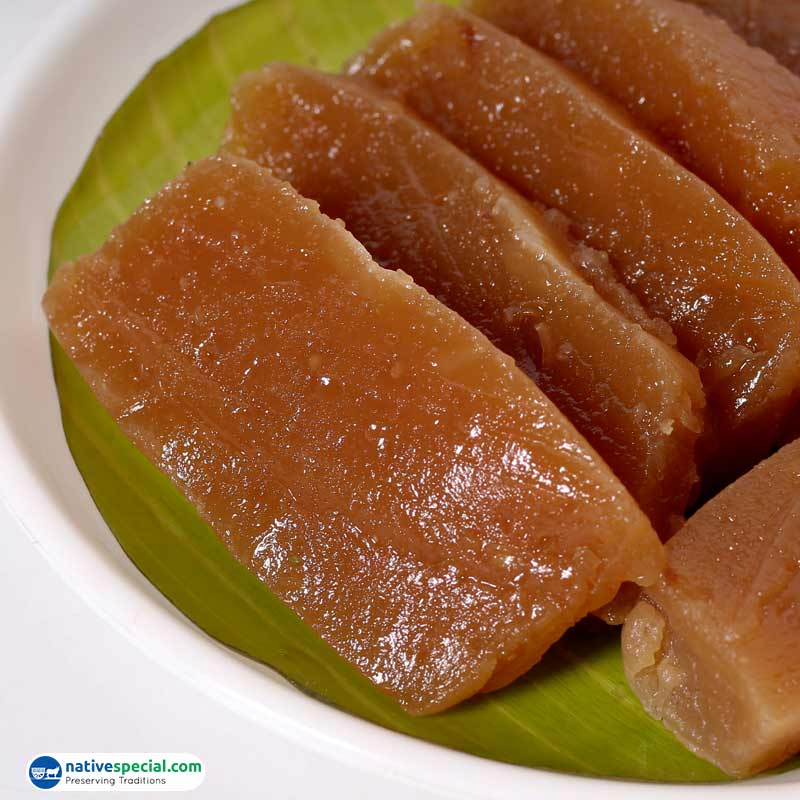 Muscat halwa is mainly because of its slow cooking technique and the use of Samba wheat. SJ sweet maker is the famous shop in Mudalur for Muscoth halwa

Product Native: Made in the town of Mudhalur, TamilNadu (India) for over 50 years. The original recipe is from Ceylon

Specialty:A Coconut Milk Delight.The Recipe of the current, Muscoth Halwa, dates back to 1966, when Joseph Abraham, our grand father (1927-2002) started his R&D with Coconut Milk, Cashews, Refined Wheat, Samba Wheat, Raisins and Cardamom. He did this R&D along with his eldest daughter Devakani, that is our Mother, who was then in her teenage.

As our grandpa once had lived in Srilanka, and later had moved to India, it was said and assumed that the recipe was brought down by him from srilanka. As the eldest Grandson, I myself had made various visits to Srilanka to find a sweet with this taste, but it was nowhere to be found. But when we started asking about this with his friends and brothers, they all said that making muscoth halwa, using coconut milk, was an outcome of none other than our Grandpa Joseph Abraham.

Though the recipe is normally available on the web today, certain micro codes of the cooking process aren’t. The details were passed on to the recipe founder’s younger grandson named I . Johnson. That is the reason why the taste of SJ Muscoth Halwa stands unique till date.

It all started with a very humble shop in Mudalur, a decent village under the then Thirunelveli District. The name Tirunelveli has been composed from the three Tamil words i.e. ‘Thiru – Nel – Veli’ meaning Sacred Paddy Hedge. Later it became Nellai Kattabomman District, but today the village comes under Thoothukudi District.