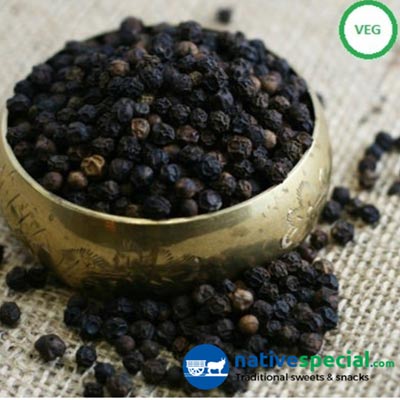 Black Pepper is the fruit of the black pepper plant from the Piperaceae family and is used as both a spice and a medicine. The chemical piperine, which is present in black pepper, causes the spiciness. Kolli Hills, near Namakkal district, is the Kerala of Tamil Nadu. Kolli Hills is known for its pepper, coffee, pineapple, cardamom and cloves. NativeSpecial brings to you Pepper from Kolli Hills, which means there’s not a pinch of pesticide or chemical fertilizer used. When you look up the sky from the Kolli hills, you can’t help but notice the long queues of pepper vines longing to touch the heavenly heights. Since ancient times, black pepper is one of the most widely traded spices in the world. It is not considered a seasonal plant and is therefore available throughout the year. When dried, this plant-derived spice is referred to as a peppercorn and is then ground into a powder to be put on food to add flavour and spice. The health benefits of black pepper include relief from respiratory disorders, coughs, the common cold, constipation, indigestion, anaemia, impotency, muscular strains, dental disease, pyorrhea, diarrhea, and heart disease.